I don’t really have any in-progress, heat-of-the-battle photos to show of this one, mainly because it was largely pretty straightforward and fast to make.  It’s not quite like frying up a hotdog, but relative to the usual array of hoops and caveats I jump through, this one went very smoothly.  All I have to share visually are lots of photos of it. I couldn’t help myself; it was hella pretty.

The base of this dish is a plank of cucumber-cashew-parsnip…something. Maybe it’s a sorbet? Making it was fascinating: I made a ‘salsa’ of diced parsnip, diced young coconut, and chopped cashews, which steeped together overnight. I then pureed it, put it through a cycle in my ice cream maker, then spread the resulting ‘ice cream’ (it contained neither cream nor sugar) onto a sheet tray, refroze it, then sliced it into long, thin planks. It didn’t stay cold for long, but also didn’t get runny as it warmed up; it took on the consistency of like a whipped custard or something. It was robust and smooth and savory. Very interesting.

The recipe calls specifically for “Young coconut”.  I didn’t immediately know what that meant, but some questioning around work and some expertise from Kris set me straight. Young coconut just means a fresh coconut that’s full of juice still, rather than an older one that has little water inside and whose flesh is much more hardened and bitter. Many grocery shops around the area sell young coconuts sort of pre-hewn for easy cracking at home, or you can poke a hole in the top to easily get to the juice: 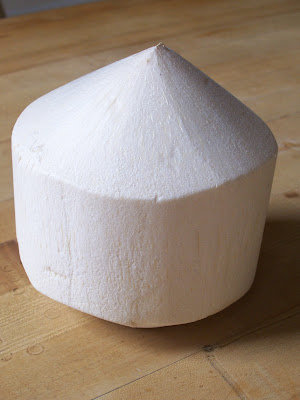 On top of the plank are whole sections of crab leg meat. We’re still in the heat of Crab season in the bay area, so finding fresh Dungeness crabs in the shops around town is pretty straightforward.  If I had been feeling really ambitious, I would have tried to hit up one of the fish wholesalers in Oakland for a live crab to cook myself, but I decided to shortcut this step slightly and get pre-cooked crab from our local grocery store in Piedmont. It was still sweet and delicious, though a bit yellow. I suspect they cooked the crab in Old Bay. It didn’t taste heavily-spiced, but the photos in the book show the meat as brilliantly-pink, so aesthetically mine looked a little different.

The crab meat is garnished with fresh basil leaves, buds, and flowers, and some strips of the young coconut flesh itself. It’s also topped with a thin, crispy chip made from parsnip, which is piled with toasted cashew powder, basil buds, and saffron.

The plate is drizzled with a vinaigrette made from mace-infused oil and saffron syrup. This stuff was pretty incredible. I’ve learned through this project that saffron is a delicious flavor; my only exposure to it before starting this project was when my mom made ‘saffron rice’ from a package when I was a kid. I thought it was only useful for color, and I wondered why people didn’t just use yellow food coloring. But this syrup is made from nearly 4 packages’ worth of saffron (so it wasn’t cheap), and smells and tastes intensely of the spice.

I had a tricky time finding whole mace; I called around all the bay area standbys (Berkeley Bowl, Rainbow Grocery, Whole Foods); almost all of these shops carry a spice line branded “Spicely“, which frankly I feel is one of the bigger rackets I’ve found going on in the bay area. This stuff is underpackaged and incredibly overpriced; 5 bucks for .2 of grams of saffron is just stupid. But even they don’t carry whole blade mace in their lineup, so I had to turn to an even more overpriced brand that I found at Rainbow.  I’ve since found a 1lb bag of blade mace for future dishes for a fraction of the cost; such is the penalty of lack of foresight I guess.

Making this dish was surprisingly satisfying; cracking up a crab and smashing open a coconut is pretty primal, and doing it deftly makes a person feel like a bit of a rock star. Or, at least, it might if you’re a food nerd like me.